Here’s What History Says To Expect From Bitcoin In 2021


Bitcoin has had an explosive breakout year as a maturing financial asset,. The cryptocurrency is finally being considered by institutional investors for the first time, during a year that will go down in history for unprecedented money printing.

The asset’s hardcoded digital scarcity is a primary driver of its boom and bust cycles, and in the year following each block reward halving, magic happens. With the new year right around the corner, here’s a look back at past crypto market cycles for a glimpse at what to expect from Bitcoin in 2021.

All markets are cyclical and go through distinct phases of bear and bull trends. These cycles can take place over the course of decades, or a handful of years. In crypto, cycles often move faster than traditional assets due to the always-on, 24/7 market.

But because Bitcoin is just over a decade old, there are only a couple of boom and bust cycles at which to glean any useable data. In technical terms, when Bitcoin breaks its former all-time high, the new bull market is on.

Fundamentally, this occurs every four years following the asset’s block reward halving. This built-in mechanism slashes the supply of BTC in half at a time when demand is beginning to resume.

The combined effect of suddenly diminished supply and growing demand throws buying and selling equilibrium so out of balance that price appreciates exponentially.

2020 has acted as the ideal example of the impact each halving can have on the market. Bitcoin went from “a fad” to full-blown FOMO in less than nine months, all because supply and demand is so favorable to positive ROI.

And while 2020 was definitely a breakout year for a bullish Bitcoin, it is next year that will make a new wave of Bitcoin billionaires. 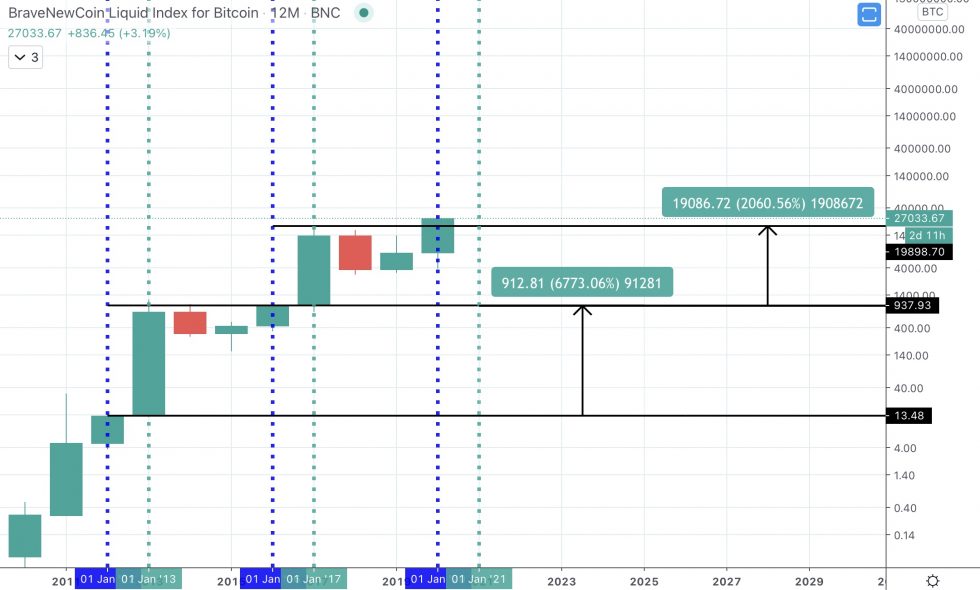 Glancing at the chart above and it’s shocking to see just how high Bitcoin has climbed in twelve years. During the twelve years of trading, the cryptocurrency has had three distinct halvings, cutting the reward miners receive from 50 to 25 BTC, then from 25 to 12.5 BTC, to the current 6.25 BTC.

Each time this happens, demand begins to so drastically outweigh the limited supply, the asset goes parabolic and rises exponentially.

In the two post-halving years on record, the first resulted in well over 6,000% ROI and the second just under 2,000% ROI. What could 2021 bring crypto investors?

In Grayscale We Trust: GBTC Bitcoin Reaches Largest Discount Ever