Bitcoin is above $40,000, after starting the new year below $30,000, and less than one year ago trading at under $4,000. The asset’s trajectory has been “only up” but could Google search trends for the first-ever cryptocurrency breaking down be a sign that the bullish uptrend will soon as well?

The world is in awe watching the latest Bitcoin rally unfold. Soaring from under $4,000 to over $40,000 in a single year’s time is no simple feat, and has required the influx of over $500 billion worth of capital.

Institutions have been more than happy to fork over tens of thousands per coin, and everyone from regular Joes to celebrities this time are included in the FOMO.

Throughout 2019 and early 2020, one sign analysts used to decipher if a bull market had started or not, was to look toward Google Trends and compare the blips to past instances of Bitcoin fever.

Only over the last few months as the cryptocurrency began uptrending hard, even last night trending on Twitter after pushing beyond $40,000 per BTC. And while it had been performing well on Google Trends, recently, the trend has begun to turn down. 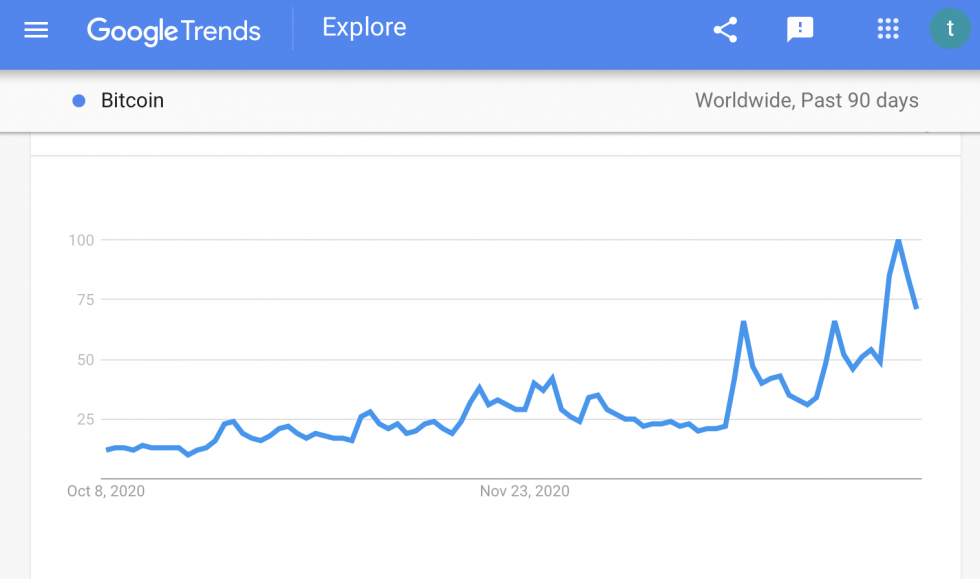 Could Waning Google Search Interest Be A Sign A Correction Is Coming To Crypto?

Timothy Peterson of Cane Island Global Macro believes that with the trend breaking down on Google Trends, the price of Bitcoin will soon follow.

The cryptocurrency has been on its second strongest uptrend historically, easily crushing 2017 that put the asset on the map in the first place.

The latest rally has the potential to eclipse what 2017 was capable of, and has already doubled its former all-time high set that year. Even if the short-term trend does break down, the long-term trend still points upward.

There also could be more to the Google Trends breakdown that Peterson recognizes. Using Google as a barometer of sentiment will become less and less effective over time. Why? Because as more and more people know exactly what Bitcoin is and what it means, there’s less need to search for information on it.

Because people no longer search for terms like “how to send email” doesn’t mean that email is suddenly dead. At some point, technology and the search to learn new information about the technology diverge and never look back.

At that point, the technology will have reached widespread enough adoption to have long-term staying power. Is that where Bitcoin is now, or are things about to turn down?