Bitcoin and the entire cryptocurrency market are currently caught in another wave of strong buy-side pressure, which has allowed BTC to surmount $24,000 for the first time today.

Where the entire market trends in the mid-term will depend largely on whether or not BTC can find any strong support around $24,000, as bulls and bears are currently battling for control of this level.

One trader is noting that the crypto could see a sharp breakdown after clearing the liquidity at its recent highs.

At the time of writing, Bitcoin is trading up just over 3% at its current price of $23,850. This marks a notable rise from its recent lows of $22,800 set just a matter of hours ago.

Where it trends in the mid-term should depend largely on whether or not BTC can gain a solid foothold above $24,000.

So far, it does not appear that bulls have enough strength to do this, as it rallied as high as $24,200 before facing a strong rejection.

One analyst explained in a recent tweet that there’s a strong possibility Bitcoin plunges lower in the days ahead, with the cryptocurrency clearing out a key liquidity region with its latest rally past $24,000.

“Bitcoin: Could see another pop higher into the red zone. This is where I’d be trailing stops on my longs if I were in one. Should pop up quickly. Could break down quickly after though. Otherwise we see buyers come up higher to clear through resistance and we fly.” 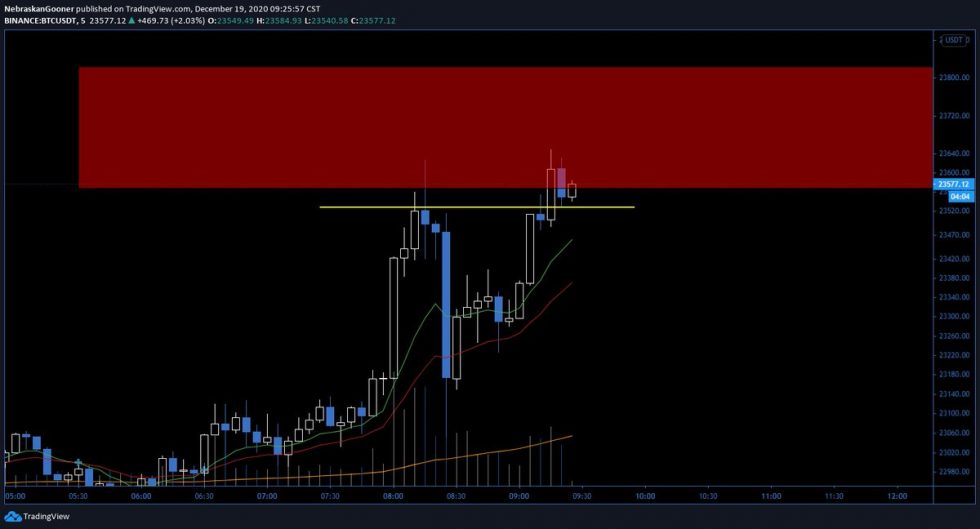 Unless Bitcoin can flip this level into a base of support, there’s a strong possibility that it will consolidate or see some near-term weakness.

Mastercard CEO is bearish on Bitcoin, but sees growth for CBDCs